"We installed MylogStar because we highly evaluated its ability to collect all logs generated by PCs, including e-mails sent/received by desknet's (a groupware product); and its good history of being installed in various companies IT systems."

In 2005 April, when enforcement of the Private Information Protection Law began, Phiten Co., Ltd. (Phiten) was apprehensive that its customers' private information might leak out through laptop PCs and USB memory devices used in the head office and/or in about 150 retail, "Phiten Shops", which had spread nationwide. In 2007, after the company's Operation Department System Management Section compared a number of log collection software products, they decided to install MylogStar (at that time, called "ALLWatcher") which was provided by RUNEXY Corporation.

After installing MylogStar, the company became able to collect all kinds of logs generated by PC operations and was able to establish the foundations of private information protection. In addition, since the software can collect logs of laptop PCs and USB memory devices, the security structure against information leakage was complete. The workforce became security conscious toward PC operations and also became well motivated.

In 2007, the Phiten Operation Department System Management Section maintained and managed 600 desktop PCs and laptop PCs in total. The section had already introduced a content filtering tool to control Internet access as a security measure and prohibited employees from visiting irrelevant websites.

Regarding e-mail, it had collected sending logs in its Simple Mail Transfer Protocol (SMTP) server and conducted regular inspections on e-mail addresses and subject lines sent from the company's PCs.

In addition, almost all the PCs already had anti-virus software installed. It could be said that the general security measures were complete.

However, Phiten, which had developed around 150 "Phiten Shops" all around the country, was apprehensive the customers' private information could be leaked from laptop PCs and/or USB connecting memory devices used by their sales personnel. Implementing countermeasures against such incidents was an urgent business.

Under the circumstance, the Operation Department System Management Section started to a study of several software products to find out which one could enable the company to collect all logs including those generated by laptop PCs and USB-connecting memory devices so that they could find the contributing factors immediately if private information leaked out.

After the section compared competitive software products, they chose MylogStar which can collect 16 kinds of logs* (including optional functions) and installed the software in the company's 600 PCs.

MylogStar, which Phiten decided to introduce in the company's IT system, can collect 13 kinds of ordinary logs and 3 other special logs using optional functions. The 13 types of logs normally collected include login/logoff, operations of applications, files a user accessed, filing operations, e-mails, accesses to the Internet, File Transfer Protocol (FTP), screen images at certain times, Transmission Control Protocol (TCP) sessions, and Windows events; and the 3 types of logs that optional functions collect are inventory information, e-mails sent/received by web mails, and messages sent/received by instant messaging.
Mr. Seiji Horiba of the Operation Department System Management Section said, "The reasons we chose MylogStar were that the software collects many types of logs including e-mails sent/received by desknet's, a groupware we have used, and web mails, and the software also has a good history of installations."

Ms. Fumiko Maki, also of the Operation Department System Management Section told us, in addition to the satisfactory kinds of collectable logs and the good history of being installed in 700 companies (200,000 clients in total), there were other reasons for choosing MylogStar;

"The Functions provided by the software are important; however, when choosing a certain product, the user interface is even more significant. If the software does not provide easy access, it is useless even though the software provides plenty of functions. On that point, MylogStar is more useful than other competitive products, and we are satisfied with the function that allows us to collect e-mail logs. Also, we can conduct log retrievals efficiently since the software can save frequently asked search criteria so that we do not need to input the same keywords again and again."

In terms of cost effectiveness, the balance of the price of the product with the accuracy of log data the software collects made it the most competitive product, and that was one of the reasons for the installation.

Established an Secure Foundation of IT Security and Motivated the Workforce

At the beginning, Phiten set goals to be achieved with MylogStar as follows;

Purpose of the Installation

After installation, what kind of results has MylogStar produced? 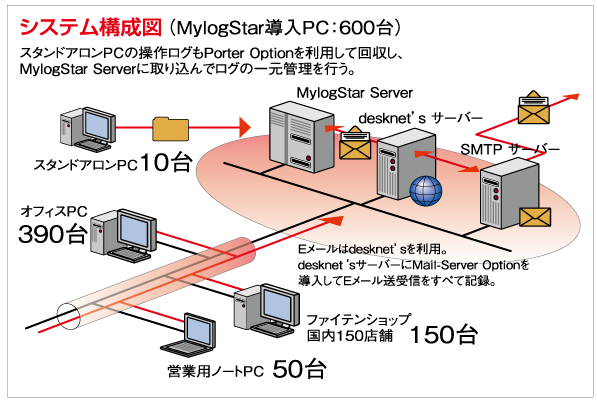 The General Information about the Customer

Phiten Co., Ltd was established in 1983 and has developed businesses for the purpose of "Supporting People's Health". The company exploited various materials developed by its own technology for dispersing metals such as titanium, gold, and silver; water-soluble at nano-levels. By utilizing those metals' qualities, the company succeeded in drawing out the "natural healing ability", which humans originally possess, and to relax human bodies. Phiten sells products which are related to sports such as: Phiten necklaces and bracelets (Rakuwa necklaces and bracelets), tapes, jells, and aqua-titanium supporters. In addition, the company provides various kinds of products and services such as: health food and goods, supplements, drinking water, cosmetics, hair care products, and medical devices. Three of them including "The Phiten titanium necklaces (Rakuwa necklaces)" are licensed by Major League Baseball (MLB) in the U.S. as official goods.